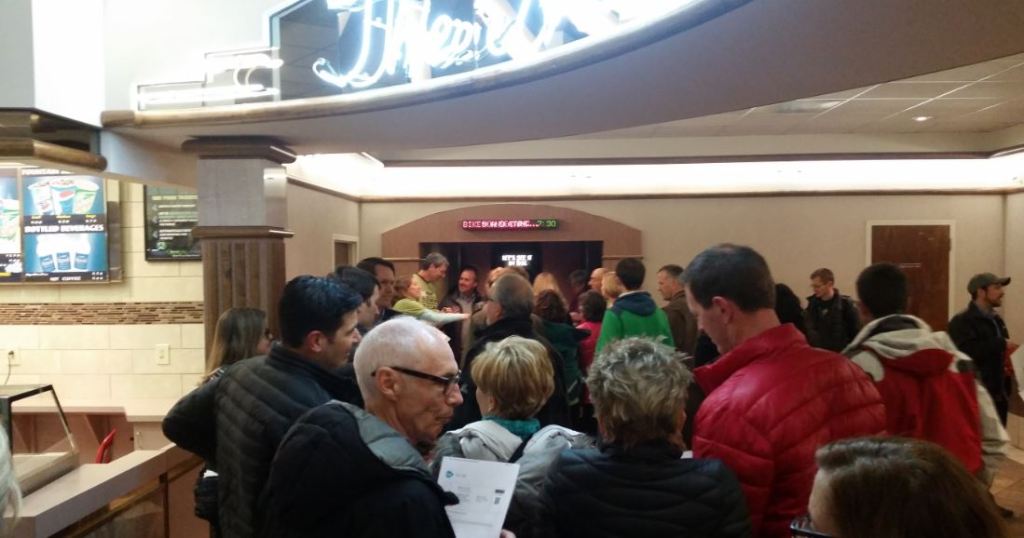 Bike Walk Greenville hosted an exclusive showing of the documentary film Bikes vs. Cars last week at the Camelot Cinemas. Immediately following the film, we hosted a brief panel discussion with local elected officials from Greenville County on the state and future of active transportation infrastructure. We sold over 200 tickets for the event and are thrilled with the support from the Greenville community for our ongoing advocacy. The Bikes vs. Cars event was the first of many opportunities this year for us to engage with our community and our elected officials in support of active transportation.

Bikes vs. Cars was an interesting documentary film that portrays the ongoing challenges faced by many cities as populations grow. The film told the story of bike activists in Sao Paulo, Brazil, uniting to engage with local government officials and stop the unprecedented rate of one cyclist death per week in the city. Los Angeles was featured as a case study for its place in history as one of the first American cities to have a bike expressway that was replaced by the freeway system in the advent of the automobile. Copenhagen was highlighted as a stellar example of what a city built for people and not cars is like.

The movie inserted humor into sometimes dark storytelling by making fun of anti-bike crusaders, notably former Toronto mayor Rob Ford. The film ended on a positive note with the government of Sao Paulo agreeing to insert miles of bike lanes onto critical streets in the city, and Los Angeles showing its potential to once again become a haven for commuting by bike. For those of us in Greenville, it opened our eyes to the plight of active transportation infrastructure and reminded us we are not in a dire situation. Our elected officials are listening to us, we have the support of some critical Council members in our cities, and we are fully at the table when the discussion of future infrastructure planning comes up.

Film attendees were encouraged to submit questions for the panel discussion, and our elected officials did a great job of helping everyone understand exactly what it takes for Greenville to become an even more bike and walk friendly community. Greenville City Council member Amy Ryberg-Doyle put it the best when she described a “complete streets” philosophy, one where the car, the bicycle, and the mother pushing the stroller are all properly and safely accommodated.

A few highlights from the discussion with our elected officials included:

Taft Matney (Mauldin City Council) said that citizens need to get more involved in local Government. He observed that very few show up at Mauldin City Council meetings, and he suggested that advocates need to engage their Council members. He cautioned about using the bikes vs cars message for local advocacy, as we have a large auto manufacturing sector in the Upstate. Instead, Taft suggested we begin conversations with what we do agree on, which is a safe and desirable community for all citizens.

Amy Ryberg Doyle (Greenville City Council) stressed that there was opposition to the East North Street road diet, yet data after its completion show that traffic is slower; the road is safer for people on bikes and mothers pushing a stroller, and traffic volume works fine with fewer lanes. Amy spoke of the economic development benefits of having biking and walking infrastructure, and it was demonstrated vividly in CH2MHill moving to Greenville from Spartanburg and wanting to be on the Swamp Rabbit Trail extension.

Brandy Hart Amidon (Travelers Rest City Council) spoke of how much the Swamp Rabbit Trail has benefitted Travelers Rest, and was excited about the new bicycle master plan that was done by Alta Planning last year. Brandy expressed a strong desire for people to live and work in a walkable bike friendly TR, but did acknowledge that their small city budget makes new projects a challenge. Brandy is was optimistic that Travelers Rest will continue to find ways to improve the environment.

Once again, thank you to everyone who supported our event and participated in the discussion. We have many exciting events planned for 2016, so stay tuned for more ways to engage with Bike Walk Greenville and help make Greenville a safe, desirable community for many generations to come. It’s time to “Think outside the car”!

Advocacy, Education
Bikes vs Cars
← Think Outside the Car
→ Feedback to the Bikes vs Cars Event

One response to “Exclusive showing of Bikes vs Cars documentary”