Thanks to the dedication of 20 volunteers on Friday March 18 and Saturday March 26, we have provided the City of Travelers Rest with important data towards improving the safety at the busy intersection of Main Street, Center St and McElhaney Rd. 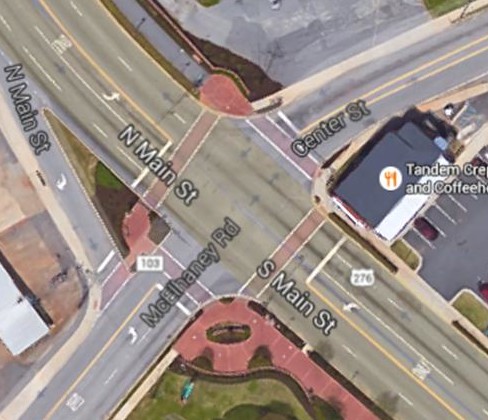 Our volunteers observed that the design of this intersection favors motor vehicles over people on foot or bikes.  When people push the button to cross the street they get a white pedestrian cross signal but vehicles are still turning across their cross walk!  Safe crossing depends on making eye contact with turning drivers, as evidenced by testimony from Michael, a cyclist who told of us of being hit by a car crossing McElhaney Road last November.

In a September 2015 meeting, SCDOT  denied the request by the City officials to require that all vehicles stop to allow people to cross safely.  They cited vehicle counts that show that traffic would stack up, motorists would need to wait though more than one light cycle at peak times, and they stated that would be unacceptable. They never addressed that people on foot or bikes must wait though multiple cycles to cross the intersection. 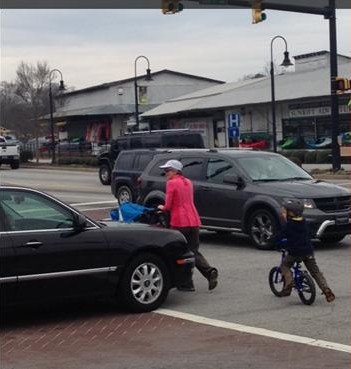 We had the opportunity to meet City of Travelers Rest Mayor Pro Tem Brandy Hart Amidon when she agreed to be on our elected officials’ panel at our February “Bikes vs Cars” film event.  We subsequently told her of our previous meeting with SCDOT and she encouraged us to get more data so the intersection safety issues could be revisited with SCDOT.

We reached out to the community and found the volunteers who generously counted people for 5 hours on Friday March 18 and for 8 hours on  Saturday March 26. The count confirmed that downtown Travelers Rest is a very busy spot for pedestrians and cyclists.

On Saturday we counted 1,613 people crossing the intersection.  March 26 was a cool, windy day with a few sprinkles of rain, yet people were in Travelers Rest enjoying the GHS Swamp Rabbit Trail as well as the shops and restaurants. The data showed 897 people were walking or running, and 716 were on bicycles. 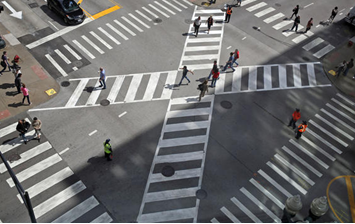 We are advocating for a Pedestrian Scramble cycle- that stops all vehicles and will allow trail users to cross on the diagonal as shown in this photo. Such intersections are becoming increasingly popular across the country, and we have found several examples elsewhere in South Carolina.

The Friday count was 385 people in 5 hours which calculates to 38% of the Saturday count on an hourly basis.  We know from previous studies that Sunday SRT use is higher than Saturday, and as such, one possible outcome is a  Pedestrian Scramble cycle on Saturdays and Sundays only.

We will keep Bike Walk Greenville followers informed as discussions continue between Travelers Rest and SCDOT.