Where to put protected bike lanes

Note: I am lucky enough to be part of a committee that determines where protected bike lanes should be installed in the City of Greenville and how to evaluate future potential protected bike line projects. Part of our discussions have included very spirited debates about how existing bike traffic on a road should impact this process. This is my personal opinion regarding that question. 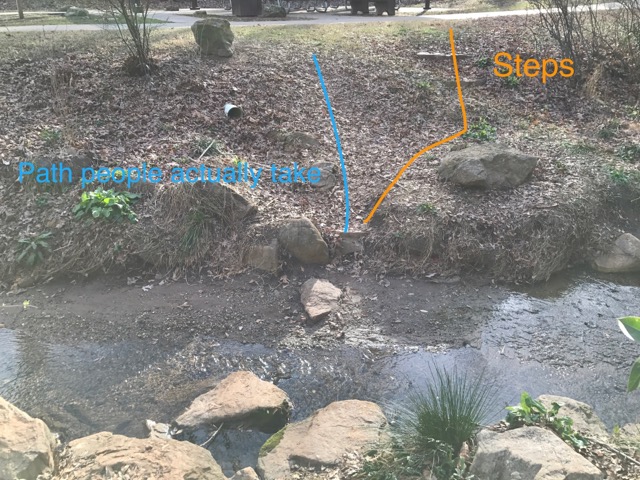 How this applies to protected bike lanes 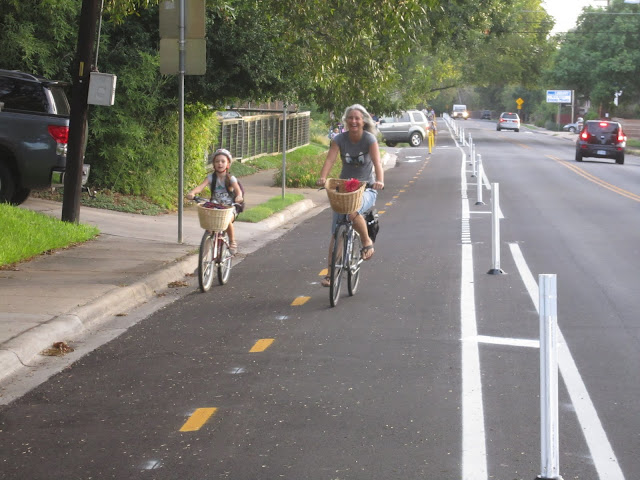 When talking about protected bike lanes, people debate about where to install them. Should they go where there already is biking traffic therefore making the route even safer and encouraging more biking traffic? Or should planners ignore established routes because they must be good enough if people are already using them. So create new biking corridors and strengthen the entire network?

In my teenage years, we lived in a house in the center of the block. To get to my school, I needed to walk up 1/2 block up the hill to get to the main road that went to my school. My neighborhood didn’t have fences, so I could also cut through my backyard and traverse the side yard between our back neighbors. This shortcut was strictly prohibited by my parents, but…it saved me walking 150 feet (literally – I measured on Google Maps), which takes about 30 seconds.

I took that shortcut every time.

Because it was the shortest distance between two points*. That how people operate. People do not like zigging and zagging if there is a more direct route. That is why route calculation algorithms take into consideration the number of turns. That is why the steps down the embankment in the park are pointless. Those steps should be moved to where the people already are.

Protected bike lanes should go where people are already biking

If people are already biking on a road, they have decided it is a good route. Either it is the shortest distance, or it pleasant to ride because of the surrounding nature, or the hills are tame, or simply to avoid a specific intersection. They have decided that is the best route for them and their bike ride should be made better for them.

Strava allows cities to purchased data about a region to see where people are biking. The data is exhaustive (and anonymized) and shows exactly how a city is navigated by bicycles. City planners need to use this information to make established routes better for the citizens by adding protected bike lanes.

The big payoff of a protected bike lane is safety.

People that are interested but concerned are going to feel safer biking in a protected bike lane. The takeaway is to find what is already being used and make it safer. The end result will be more bikers and that is the ultimate goal.

Another argument for strengthening existing bike infrastructure on well-used bike routes is visibility. A problem in Greenville is the lack of viewing biking as a valid form of transportation. Sure, folks will go on the Swamp Rabbit Trail on the weekend, but bike to work, or to get groceries, no thanks!

People don’t consider biking to places because they don’t see anybody else doing it. And who can blame them, in South Carolina, biking mode share is pitifully low.

Protected bike lanes need to be added to roads that already have bikers on it. The effect will be more bikers and this will be increased visibility. With increased visibility will come increased normalization and acceptance of bikers. And the net result is going to be more people choosing to bike because it seems like a valid option.

In summary, the best outcome will come from adding protected bike lanes to roads that are already well traveled by bikes. This will make good routes better and more likely to be used and will have the greatest visibility impact on the citizens of Greenville.

*I was also very obstinate as a teenager. Just back then, not now.

How to make protected bike lanes most effective was originally published at timhibbard.com